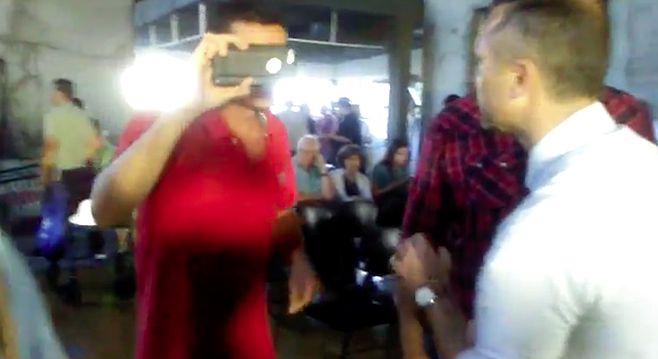 Immigration lawyers in the San Diego community say that undocumented immigrants have more rights than they know and have more ways to be allowed to remain in the U.S. than they believe. But there’s one thing they say you should pay close attention to: “Don’t miss the last U.S. exit from the 5 or the 905,” said Esmerelda Flores, from the American Civil Liberties Union of San Diego and Imperial Counties.

U.S. Rep. Juan Vargas echoed the sentiment. “Don’t miss that last exit,” he reiterated. “We have a lot of people who cross the border with a gun they forgot about, including members of the military….We’ve been able to work these (returns) out quietly except the one celebrated case.”

They spoke at a community meeting in Sherman Heights Monday night, where immigration lawyers Matt Holt and Tammy Lin talked about what they can do for people trying to improve their immigration status. “It’s not unusual to have people come in and say they want to apply for DACA (The Deferred Action Childhood Arrival) and we find they’re eligible for other programs,” said Lin, who is active in American Immigration Lawyers Association. “I know it seems expensive but it’s really important to make sure you’re talking with qualified people about your immigration status.”

There are plenty of unscrupulous people ready to take advantage of worried immigrants, Holt said. “Make sure you see all your options before you make a choice…..If they tell you about a law, ask them to show you the law.“

But things also go wrong because family and friends try to help out “Sometimes, well-meaning people send people down the wrong path and it’s hard to recover from,” Lin said. “Friends and family try to help with the paperwork not understanding these are legal documents that must be filled out truthfully.”

Among the 120 or so people at the meeting were two or three Make America Great Again shouters, outraged by a range of problems. By the middle of the presentation, they were cat-calling; by the end of the Q & A, they were shouting over the panelists’ answers. “These are the people who say others should follow the law and they can’t even follow the rules of civilized society,” Vargas replied.

“They want attention so let’s give them attention.” The polite applause from the audience did little to placate them. But even the shouters were astonished by a man who stood up, apparently recording himself as he preached that Wall Street — a distant neighborhood where the undocumented rarely visit – had corrupted Vargas and the world in general.