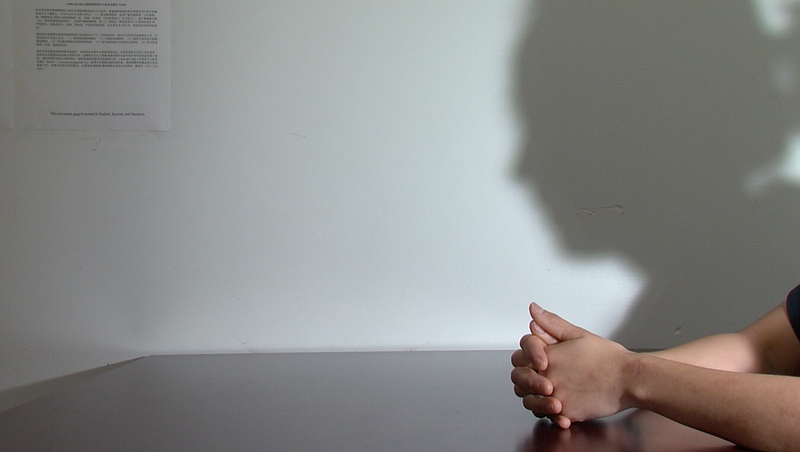 In San Diego, a pregnant mother in immigration detention embodies the broadened focus of President Trump’s immigration crackdown, which no longer pivots around serious criminals but anyone who entered the country illegally.

Maria Solis Jasso, 28, filed an application for release from the Otay Mesa Detention Facility earlier this month, with the hope of fighting deportation from her home in North County, where she lives with her three daughters, ages 10, 4 and 2. Solis asked KPBS not to show her face during an on-camera interview late Thursday.

“I don’t want my daughters to see my face in this uniform — I think it’s painful enough for them to know I’m not with them,” she said, her voice breaking. “All they know is mommy went to work and still has not returned.”

With strands of black hair surrounding her face that fell from a low ponytail, Solis repeatedly wept during the interview and said she feared she was going to have a miscarriage.

“I’ve been having a lot of cramping since I came, and the only thing they’ve been able to do is to tell me to drink a lot of water and get Tylenol,” she said. “The doctor said, ‘keep in mind, you’re going to hear a lot of stories, but if you happen to lose your baby in here … it is not our fault, there’s nothing we can do about it.'”

Since KPBS began investigating Solis’ case, Solis said she has received an extra mattress in her cell and has had mandatory blood samples taken. But she said it took weeks for that to happen and that she is still worried about her health. Solis said she requested an ultrasound to hear the baby’s heartbeat, but that she was told the on-site machine is broken.

The agency’s guidelines regarding pregnant women in custody say officials will not detain them “absent extraordinary circumstances or the requirement of mandatory detention.”

Lauren Mack, a Immigration and Customs Enforcement spokeswoman, released a statement Friday regarding Solis’ treatment while in custody:

“While in ICE custody, Ms. Solis has received timely and appropriate medical care, including prenatal vitamins and lab tests related to her pregnancy. Ms. Solis’s medical records indicate she has been seen by ICE medical staff at the facility 10 times since coming into the agency’s custody earlier this month.”

Solis said she has counted at least two other pregnant women in the facility. She said she is about two months pregnant and that her cramping gets worse when she is feeling stressed about being detained. Solis added the cramping is severe.

Solis, who is from Mexico, said she was detained on Aug. 1 while walking to work as a deli cashier. She said an officer from ICE told her a prior order of removal had been reinstated, and he took her to the Otay Mesa Detention Facility.

In their statement, ICE also shared some information on why she was detained.

“Depending on the alien’s criminal history, an alien who illegally reenters the United States, after having been previously removed, has committed a felony punishable by up to 20 years in federal prison.”

Solis said she was brought to the U.S. by her parents — a U.S. citizen and a legal permanent resident — when she was a young child. When she was a teenager, she traveled to her birth state of Jalisco, Mexico to stay with some relatives. She said she did not realize she would not be able to come back to the U.S. When she returned illegally in 2007, she was caught and deported. Solis managed to return to the country she considered home, but the first failed attempt left a stain on her immigration record that has come back to haunt her a decade later.

Solis’ attorney, Leah Chavarria, has asked the U.S. Department of Homeland Security to let Solis fight her case from home. She said immigration officials have the authority to release Solis on bond or an order of supervision.

“She deserves to be released and live her life in the U.S. while she fights her immigration case — she’s not a threat to the community, in fact, the community strongly supports her,” she said. “We’re paying valuable tax dollars for her to be detained.”

Immigration and Customs Enforcement is required to house at least 34,000 detainees on any given day in its detention facilities, mostly privately run. Trump has expressed plans to expand the quota to 80,000.

Chavarria said Maria qualifies for a U-Visa, a nonimmigrant visa for victims of crimes.

Solis’ sisters, Carmen and Izabel, are U.S. citizens. They started a petition asking for Solis’ release and are asking the community to contact Congressman Darrell Issa on their behalf.

In the meantime, Solis’ family is helping take care of her daughters.