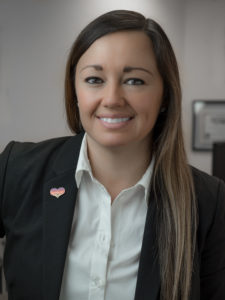 Mrs. Cabrera was born in Mexico City, but raised in San Diego, California.  She attended undergrad and law school in San Diego.  She joined the firm in 2016.  Her immigration experience is comprised mainly of removal defense and family-based immigration cases.  She has extensive experience representing detained and non-detained clients in removal proceedings that are seeking asylum, cancellation of removal, adjustment of status, bond/parole and representing clients on appeal before the Board of Immigration Appeals and before the Ninth Circuit Court of Appeals.

In law school Mrs. Cabrera worked for the San Diego Public Defender’s Office and gained knowledge of criminal law which allows her to thoroughly understand the immigration consequences of criminal arrests and convictions.  Mrs. Cabrera has always been passionate about working with marginalized communities, specifically the immigrant and LGBTQ communities.

In her free time, Ms. Cabrera volunteers with the Human Rights Campaign (HRC) to fight for equality on all levels for all people.  HRC is the largest organization fighting for LGBTQ equality in the United States.  She is a member of the National Board of Governors for HRC and currently serves on the Executive Committee. She has also been a member of the HRC San Diego Steering Committee since 2014.  She enjoys spending time with her wife and their two dogs, Franklin and Pocket.  She also enjoys hiking, traveling, camping, concerts, trying new food and cooking.

U.S. District Court for the Southern District of California

U.S. Circuit Court of Appeals for the Ninth Circuit

Member of the National Board of Governors, 2018-Present